* In case of any delay in receiving the OTP, you may verify it later. Please proceed without verification.

Enter your City name or Pincode

When talking about religious tourist attractions in India, one cannot miss the very popular Tirupathi Temple. Also known as Sri Venketeswara Temple, it is located in the hill town of Tirumala in Chittoor district of the south Indian state of Andhra Pradesh. The temple is dedicated to Lord Venketeswara, a reincarnation of Lord Vishnu. Lord Venketeswara is also known by other names like Srinivasa, Balaji etc. The legacy of the temple is elaborated in many Tamil and Telugu religious texts. The temple is considered one of the eight Sywayambu Kshetras of Vishnu where presiding deity is believed to have manifested on its own. The temple has its origins in Vaishnavism, an ancient sect which advocates the principles of equality and love, and prohibits animal sacrifice. 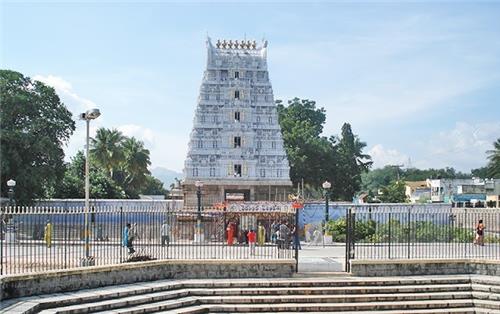 The word Tirumala is derived from Tiru and Mala. Tiru means holy/sacred and Mala means mountain in Tamil. Thus, it translates to Holy Mountain.

It is believed that the temple is the richest temple in the world in terms of donations received in wealth. It is also the most visited place of worship in the world. On an average the temple is visited by 50, 000 to 1, 00, 000 pilgrims every day, which makes it 30 to 40 million people annually. It comprises seven peaks, representing the seven heads of Adisesha, thus earning the name Seshachalam. The temple is on Venkatadri, which is the seventh peak. The temple is also referred to as ‘Temple of Seven Hills.’

The seven peaks are -

The history of the region is incomplete without mentioning the mighty Sri Venketeswara Temple. The history of the temple itself is vast. The fist temple at Tirumala was built by a Tamil ruler King Thondaiman. He had a dream of Lord Vishnu and that’s how the temple was built. It is believed that the original gopuram (tower) and Prakhara of the temple were built way back in the 8th century. The Pallavas of Kanchipuram (9th century AD), the Cholas of Tanjore (10th century), and Vijayanagara pradhans (14th and 15th centuries) were all devotees of Lord Venketeswara.

With the passage of time the administration of the temple also saw various changes. In 1843, the administration of Sri Venketeswara Temple and many other shrines was entrusted to Seva Dossji of the Hathiramji Mutt at Tirumala as Vicaranakarta for nearly a century until the Tirumala Tirupati Devasthanams (TTD) was established as a result of the TTD Act in 1932.

Today TTD works under a board of trustees. The everyday operation and management of TTD is undertaken by an executive officer who is appointed by Anfhra Pradesh government. The annual budget, estimated at INR 10 billion in 2008, runs charitable trusts whose funds are derived from the budget and donations from the devotees.

There are various integral parts of the temple that hold specific importance in the architecture of the temple. 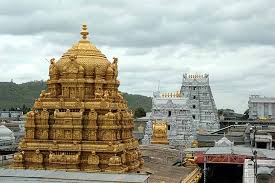 This is tower with golden roof. Vimanam or the inner temple houses the main deity of Lord Sri Venketeswara. The sanctum sanctorum called Garbha Gruham is where idol of Lord Venketeswara is placed. The deity is placed beneath a gilt dome called the Ananda Nilaya Divya Vimana. Legends say that the deity has been self manifested which means that no human being installed the deity in the temple. Pilgrims are not allowed to enter the Gabha Gruham. Bangaru Vakili means the main entrance in Telugu. Devotes can enter the main entrance from  Tirumamani Mandapam and then reach the  inner sanctorum.

The Lord wears a gold crown with a large emerald embedded in the front. On special occasions, he is adorned with a diamond crown. The Lord has a thick double tilaka drawn on his forehead, which screens his eyes. His ears are decorated with golden earrings. The right hand is pointing to his lotus feet. His left hand is akimbo. His body is dressed with yellow clothing tied with gold string and a gold belt with gold bells. His feet are covered with gold frames and also adorn gold anklets. A sacred thread called yajnopavita runs across from his left shoulder. It bears Goddess Lakshmi on the right chest and Sri Padmavathi Devi on the left. During abhishek devotees can have darshans of Goddess Lakshmi as well.

Following are the dieties in Tirumala Temple:

The main stone deity of Lord Venketeswara is called Dhruva Beram, where Dhruva means ‘pole star’ and Beram means ‘deity’. The deity is about 8 feet (2.4 m) from the toes to the top of the crown and is considered the main source of energy for the temple. 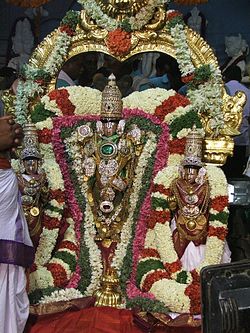 Also known as Kantuka Beram, this is a tiny one foot silver deity which was given to the temple in 614 AD by Pallava Queen Samavai Perindevi, and has never been removed from the temple from the day it was installed. It is called Bhoga Srinavasa because it relishes all the bhogas (worldly pleasures) offered to Dhruva Beram. The deity was placed near the left foot of the main deity.

This idol of the Lord represents the anger part of Lord Venkateswara. He remains inside the sanctum sanctorum, and comes out on only one day each year: on Kaishika Dwadasi, before the sunrise. The deity is also referred to as Snapana Beram, Snapana means cleansing. It is cleansed daily with rosewater, ghee, turmeric, milk, sandalwood paste, curd etc.

This is the form of the Lord which comes out of the temple to see the devotees. This deity is also called Malayappa, and its consorts are Sridevi and Bhudevi.

This panchaloha idol resembles the main deity, and represents the presiding officer for all activities and rituals in the temple. It is also known as Bali Beram and is considered to be the guardian angel by the devotees. Koluvu Srinivasa presides over all the financial and economic affairs of the temple.

Lord Venketeswara is a reincarnation of Lord Vishnu. He symbolizes goodness. Devotees and followers believe that Lord Venketeswara is a very merciful form of Lord Vishnu and fulfills all the wishes made to him by his dedicated devotees. Lord Vishnu is worshiped in the Temple as per Vaikhanasa traditions. The ancient texts indicated that Lord Vishnu should be worshipped six times a day.
All these aradhanas are performed by hereditary Vaikhanasa priests, who have been performing the services for generations. Only these priests are allowed to touch and offer service to Lord. These set of Archakas are called Mirasidars (owners and shareholders of the temple). The four families of the Tirumala Temple which are in this Mirasi are the Gollapalli, Peddintti, Paidipalli, and Tirupathammagari family.

The other temple activities include -

The prasadam of Tirupathi temple is famous all over the world. The same prasadam is offered at Tirumala temple as well. Apart from the trademark laddoo, there are other prasadams also available like – curd rice, tamarind rice, sweet pongal, appam, Muruku, Dosa.

A large number of devotees get their hair tonsured as a form of offering to Lord. There is a legend behind tonsuring of hair. Lord Balaji was hit on his head and a part of his scalp became bald. This was noted by Neela Devi, a Gandharva princess. She felt that lord’s attractive face should not have any flaw. She cut her hair using her magical powers and implanted it on Lord Balaji’s scalp. Lord noticed her sacrifice.  As hair is a beautiful asset of the female form, he promised her that all his devotees who come to his abode would offer their hair to him, and she would be the recipient of all the hair received. Hence, it is believed that hair offered by the devotees is accepted by Neela Devi.

Each day over a ton of hair is collected which is sold by the temple organization several times a year as public auction to international organizations. The auction brings approximately $6 million to the temple's treasury. This is the second highest income generating activity in the temple next to the Hundi Collection.

Tirumala Temple gives a chance for the pilgrims to participate, view and be a part of the various sevas performed to the Sri Malyappa Swami, Dhruva Bhera, Bhoga Swami and all other idols at the temple. On buying the seva tickets, devotees get the golden opportunity to see the seva being performed for the lord and take home the prasad which can be clothes, food items – laddoo, dosa, pongal, vada and a darshan of utsava murti.

All the Vaishnava festivals namely Ram Navami, Vaikuntha Ekadashi and Janmashtami are celebrated with great zeal in the region. A big festival called Brahmotsavam celebrated every year during September. It is the most important festival of Tirumala. The festival lasts for about a week and attracts millions of devotes from all over the world. During the Vasanthotsavam (spring festival) held in March – April and Radhasaptmi celebrated in February the idol of Lord Vennketeswara is taken out on a procession. 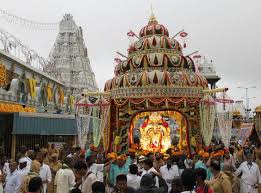 How to Reach Sri Venketeswara Temple

After reaching Tirupathi, one can easily reach Sri Venketeswara Temple.

By Road
There are direct bus services from Tirupati, the frequency of a bus being every 2 minutes. Tourists can also get direct buses to Tirumala from Chennai, Vellore and Bangalore. Hailing a private taxi is also a feasible option to reach Tirumala temple.

By Rail
Tirumala does not have its own railway station. The nearest one is in Tirupathi, about 26 km.

By Air
The nearest airport to Tirumala is near Renigunta about 15 km from Tirupati. This domestic airport has direct flights to Hyderabad, Visakapatnam, Chennai, New Delhi and Bangalore and is now being upgraded to an International airport.